With the right process and tools, a group of smart, hard-working people can be wiser and more productive than the sum of its parts.

A group of people can become a mob or a team. 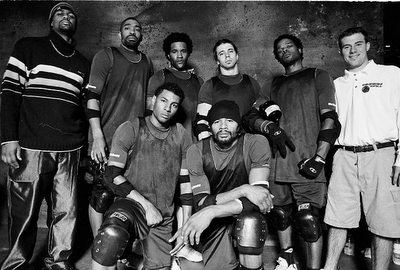 One of the first Slamball teams, the Chicago Mob

A mob is collectively motivated by fear, superficiality, and competitiveness. Mobs are destructive. There are many examples of mobs; the ones in the U.S. Congress are particularly dangerous today.

A team is collectively motivated by productivity, consensus, and respect. Teams are productive. I have made my career building highly functional teams out of smart, opinionated, socially and ideologically diverse individuals.

The difference between a mob and a team is the right process and tools to reward productivity, reason, and consensus and to discourage divisiveness, grandstanding, and indulgence.

The difference is the Ethosphere.

With the 2012 U.S. election year upon us, there will be a great deal of discussion about national politics over the next few months. If these discussions take place, as they typically do, in coffee shops, bars, and in comments on news web sites, nothing whatsoever will come of them. Yes, it'd be great if each of us would use such discussions to formulate and refine our views and then send the result to our representatives and electors. But who has the time for that? And it's only one voter's opinion anyway.

What if, instead, there were an easy way for you and a few of your like-minded friends to have those discussions online, capture the results, and automatically email your collective resolutions to the appropriate representatives? Now it's not just one voter's opinion, but 5 or 15 who agree on something.

Even better, invite some of your non-like-minded friends to the team. Diverse opinions make for more lively discussions and with the Ethosphere machinery leading you toward and rewarding consensus, your team's collective decisions will likely be more well-rounded and, ultimately, hold more weight with their intended audience.

It will be a while before Ethosphere becomes the de facto mechanism for cities, municipalities, or even neighborhood associations to deliberate and make decisions. In the mean time, the same sort of bootstrap strategy described above can be used to get a few people working together and sharing their results with the empowered decision makers.

Suppose you and your neighbors want the neighborhood park cleaned up or new art placed in the lobby of your building. All you need is to start a Ethosphere teamspace and send email invitations to a few of your neighbors. Someone drafts a simple document with the details, costs, etc., of the plan, and you all discuss, comment, and perhaps amend it until everyone agrees, and then the proposal is emailed to the HOA board. Next time an issue or request comes up, the same HOA teamspace can be used, a few more neighbors are invited to join, and pretty soon, most of the official business of the HOA is happening online in the most efficient, and least taxing way possible. The physical HOA meetings become a mere formality.

The Ethosphere is not about supporting existing political power structures like HOAs and municipal governments. It is about supporting the people who are disenfranchised by those existing institutions. The governance structures that have evolved in the physical world are archaic, time-consuming, and worst of all, exclusionary. The Ethosphere is specifically designed for the Internet as a single set of consensus mechanisms that scales to support online activism at all levels, from neighborhoods to nations.

The real target market isn't the HOA itself, it is the much larger group of folks who are annoyed or angry at their HOA boards but who don't have the time or organizational resources to do anything about it.

It's about activism, not governance, initially anyway. At first, Ethosphere's authority will stop any time it bumps against a lawyer. Existing bylaws and rules will not allow it to be used in any official capacity. But the solution to that is not to perpetuate these broken, non-scalable physical mechanisms. The solution is to support and encourage online activism around these official structures and let nature take it's course. If it works as well as I think it will, then somebody will soon write a set of bylaws that will grant Ethosphere teamspaces legal authority as governance mechanisms at some level.