Let's play a party game. Here are the rules. When each of us arrives at the party, the host hands us some flash cards. Each card has a single number and a single word written on it. Generally, cards have different number-word pairs, but the same pair might be repeated on more than one card. A given number is always associated with the same word, however. 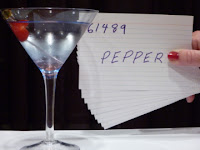 Everybody gets some number of cards, from just a few to a handful or even a whole deck. We are told we may swap cards with others, in pretty much any way we want, except we cannot look at others' cards. In fact, we can communicate with others in only two limited ways: we can write a short note on a slip of paper and hand it to one other person, or we can shout a message to the entire group. The latter mechanism is somewhat error-prone since we can never be sure others are listening and can hear our shout. Also, someone else may decide to shout at the same time, in which case neither of you may be heard.
After a few drinks, the game commences. The host chooses someone at the party and hands her a slip of paper on which is written a simple question, "What word is on the card whose number is 50342?"
Staying within the rules and constraints outlined above, how would you behave, and how would you want other party goers to behave, in order to "efficiently" answer that question?
By Jim Dutton at 12:28 PM